Rebetika music is a type of Greek folk music that originated in the early 20th century. It is typically characterized by its melancholy and introspective nature, as well as its use of the bouzouki instrument. Rebetika music became popular among the Greek diaspora in the 1930s and 1940s, particularly in cities like Smyrna (now İzmir) and Constantinople (now Istanbul). Rebetika has since experienced a revival in popularity, both in Greece and among Greeks living abroad.

The origins of rebetika music can be traced back to the early 20th century, when it began to emerge as a distinct genre of Greek folk music. It was typically characterized by its melancholy and introspective nature, as well as its use of the bouzouki instrument.

In recent years, rebetika have undergone a revival in popularity, both in Greece and among Greeks living abroad. This resurgence of interest has led to a renewed appreciation for the genre's unique sound

Rebetika music is often played at tavernas, or Greek restaurants, and is a popular choice for background music in these establishments. It is also commonly heard at Greek weddings and other celebrations.

The lyrics of rebetika songs often deal with themes of tragedy, heartbreak, and loss. However, they can also be upbeat and positive, particularly when sung by female vocalists.

some catchwords shrill from the bland

It’s your name I do know and your image too

since once more you revive

and I search the way out looking forward to" 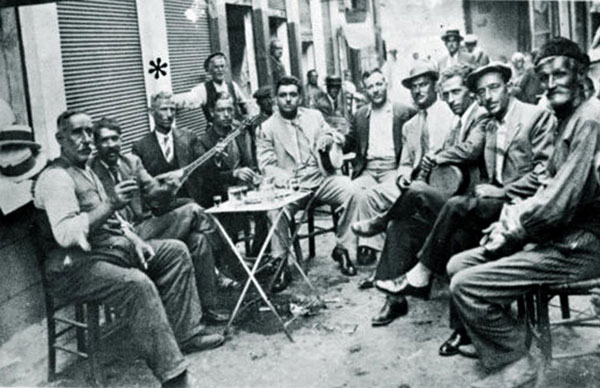 Roza Eskenazi (mid-1890s – 2 December 1980) was a famous Jewish-Greek dancer and singer of rebetiko music born in Constantinople. She was a singer and actress who had a successful recording and stage career from the late 1920s into the 1970s.

Sotiria Bellou (August 22, 1921 – August 27, 1997) was a Greek singer and performer of the rebetiko style of music. She was among the most revered rebetis of all time, and her name has been mentioned in a variety of music guides. She also contributed to the 1984 British Documentary entitled Music of the Outsiders.

Márkos Vamvakáris (10 May 1905 – 8 February 1972), was a rebetiko musician. Márkos is best known by his first name in Greece, with writers and fans simply referring to him as "Márkos."Vamvakaris' nickname, which means reflects the great importance of his work for the rebetiko genre: Markos is the "patriarch of the rebetiko".

Search till you're blind:

Where to Find Rebetika Music in Athens

Visiting Athens is not only about the Acropolis or the vast options of Museums and historical things to do for all the family. Athens is about culinary and arts, modern metropolis in the modern era. Below you can find some spots that treat Rebetika with respect alongside good wine and decent non touristy food... just like the old good times!

Aggelos, located in the Exarchia neighbourhood, is one of the best rebetika restaurants in Athens. It's on the first floor of a Neoclassical structure. Every evening, a band performs live. Every Saturday, you may see Lena Kitsopoulou, a great Greek actress who performs rebetika. Another place,  Kavouras is over at Exarchia Square, on the first level of a building right above a souvlaki joint that never shuts its doors. Other places in Athens where you can find pure rebetiko music are Marathonitis in Pagrati, famous for its wine straight from wooden barrels, Hamam in Petralona and Pinoklis or Triporto in Keramikos area.